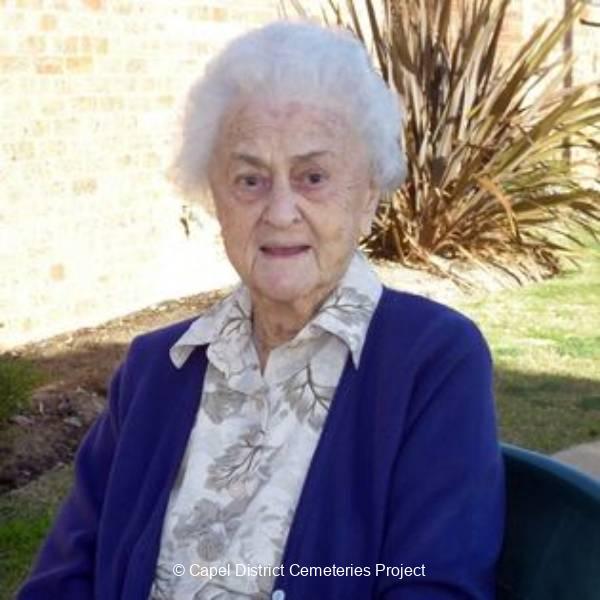 Born 5 February 1929 the youngest daughter to Frederick (Dave) and Martha Williams of Capel.  Clarice grew up in the peaceful town of Capel with her older brothers and sisters, surrounded by extended family as both her parents were from local families.

At the age of 5 years in 1934, Clarice along with her mother and sisters Lorna, Linda and Mavis were involved in a car accident.  During a heavy rainstorm, Mrs Alex Hayes, of Bunbury, was driving her car in an easterly direction along Stirling Street and about to proceed across the Spencer Street intersection when a car driven by Ernest Newman, suddenly made its appearance, coming out of Arthur Street.  Newman apparently swerved to avoid a collision but struck the front near side bumper of Mrs. Hayes’s car.  His car immediately somersaulted and came to rest on its side, the occupants of the car being thrown out. Newman and Mavis Williams were admitted to hospital the other sustained minor injuries.

Clarice attended the local Capel school along with her siblings and cousins.  In December 1941 Clarice was awarded Champion Girl at the School Sports Day held in December.

Clarice loved to cook, as did other members of her family.  At age 18, Clarice was the Winner with her Cream Puffs at the Wildflower and Handicraft Show held in Capel.

Ferns and white flowers wreathed St. John’s Church, Capel on Saturday, April 24, when Clarice Dawn, fourth daughter of Mr. and Mrs D. Williams, of Capel, was married to Brian, only son of Mr. and Mrs. Sanderson of Geraldton.

The bride, who was given away by her father, wore a charming gown of white needle-run lace, under which glimmered white satin.  Her coronet of orange blossom caught the misty folds of her exquisite silk embroidered tulle veil and white dahlias and chrysanthemums laced with fern, comprised her bouquet.

Her attendants were Mrs L. Harrison, the matron of honour, and Miss Joy Turner, as bridesmaid, Maureen Griffiths and Sandra Williams were the flower girls.  Mrs Harrison and Miss Turner chose bouffant gowns of lemon brocaded organdie, while soft green organdie frocks highlighted with ruching were favoured by the flower girls.

Fresh flowers misted in silk veiling were worn on their heads and mittens to match their gowns were favoured.  Dahlias in tawny shades made the bouquets.

After the ceremony, which was conducted by the Rev. Boxall, the 200 guests gathered at the Capel R.S.L Hall, where Mrs. Williams in a smart black crepe gown worn with red spray, received the guests.  She was assisted by the bridegroom’s sister-in-law in a becoming gown of pastel blue.

After the cutting of the beautiful wedding cake, which was made by the bride’s mother, the bride slipped away to change into her going away frock of sea green silk crepe contrasted with floral shades.  Black accessories were worn.

The wedding was one of the largest ever held in Capel.

Below is the Eulogy spoken at Clarice’s funeral as written by her eldest daughter Lorraine.

Youngest daughter to Fred and Martha Williams of Capel.  Sister and sister-in-law to Linda and Les, Colin and Tim, Lorna and Jim, Mavis and Richard and Gladys all deceased.

Clarice met Brian Sanderson at the Capel Inn where she worked in the kitchen and Brian was residing while working at the Capel Railway Station, Brian was having his washing done by Clarice’s mother Martha.

They were married at the Anglican Church in Capel on the 24 April 1948 and have been married for 70 years.  It is hard to believe but Clarice rode on the back of Brian’s motor bike and they would go fishing on the Collie River.  Brian then worked at the Picton Station.  They lived at Picton with daughter Lorraine and Son Lindsay until a move was made to Brunswick where Brian was Ticket Master.  They bought a house in Talbot Road up on the hill.  Brian would ride to work on a push bike with Lorraine on the back to school.  Sundays were spent with much fun driving to Capel to nanna and grandads for roast lunch, apple pie and homemade ice cream.  We sang “Ten Green Bottles Hanging on the Wall” all the way.

Memories of my grandparent’s house where of picking mulberries, loquats, apricots, grapes in the back yard and chickens, geese, three cows to milk and separate the cream and lots of birds such as canaries, budgies, finches and a pink cocky that called out Nanna.  Mavis and Dick lived on the block and many hours were spent playing with cousins Maxine and Lynette

Along came a third child Paul.

Brian was then granted relief work and he had to travel around the south west with a little caravan and work at different stations while Station Masters where on holiday. Brian and Clarice bought a house in Capel, just up from the bridge, close to town and next door to Colin and Tim and Lorna and Jim so that Clarice could be near family while Brian travelled as a relief.

There fourth child Sharon was born.

Christmas holidays were always a celebration with Brian’s roast duck on the table and vegetables from the back garden.  The get togethers where celebrated with Maureen and now Ted and Linda and a table full of goodies.  There were many families wedding and social dances at the old Capel Hall where Linda did the catering.

Next stop was Boyanup Railway Station, where Brian was the last Station Master.  Clarice was a very good cook.  Famous for her sponge cake.

Brian and Clarice retired to live in Clifton Park in Australind where Brian could pursue his passion for fishing and crabbing on the estuary.  Mum cooking the battered fish for all the family.  Clarice was mother to four children, nanna to 8 grandchildren and 12 great grandchildren.  Her beautiful knitting and crochet saw all the new babies dressed in the finest outfits, jumpers, dresses, shawls, and later everyone had a knitted blanket.

They moved into a small unit on Mardo Ave opposite the Australind Shopping Centre and Doctors.  Clarice then had two minor strokes and then one large one.  Brian cared for her for a long time but unfortunately her needs meant that Ocean Star Nursing home was her last home.  Here she received the best of care for 7 years and Brian and family visited regularly.  Clarice was a quiet person and enjoyed her last days near the ocean and in peach and quiet that she liked.

If you are visiting this page and have further information that pertains to Clarice Dawn Sanderson that you would like to add, can you please contact the Capel District Cemeteries Project via the CONTACT US section at the bottom of the main page. 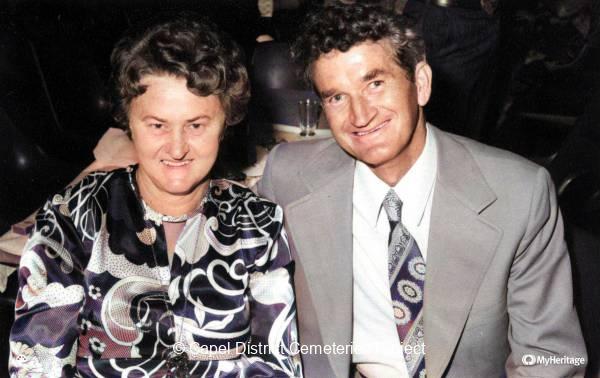 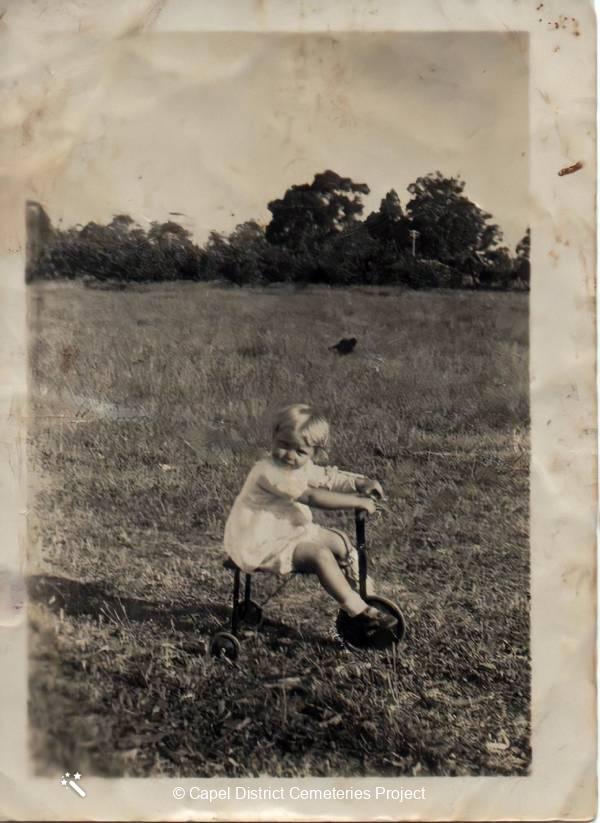 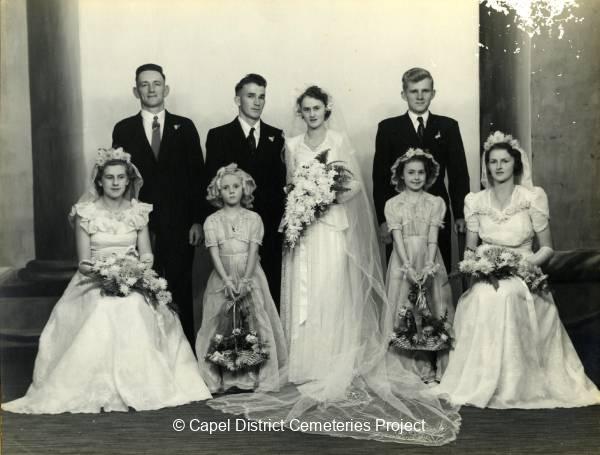 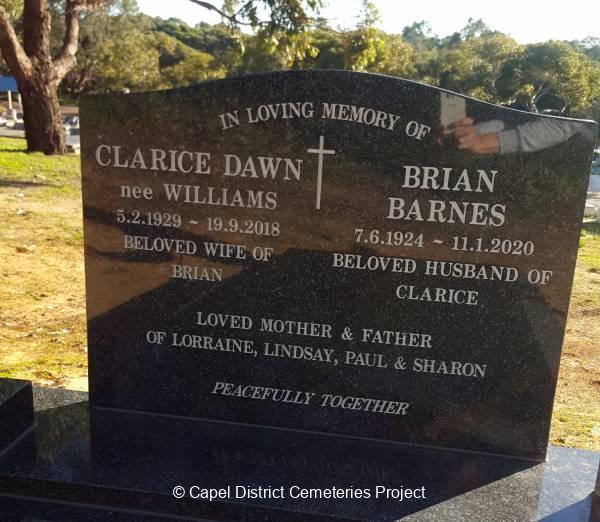 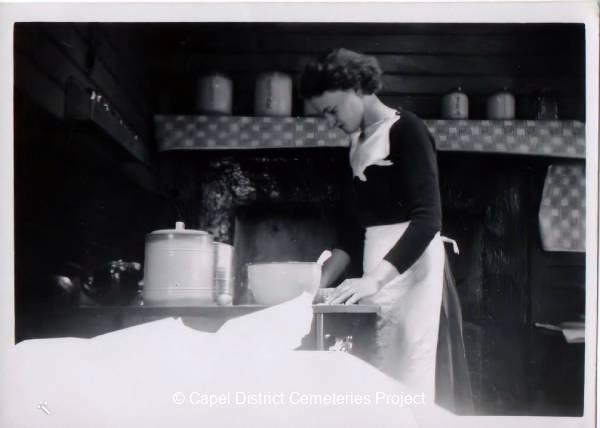