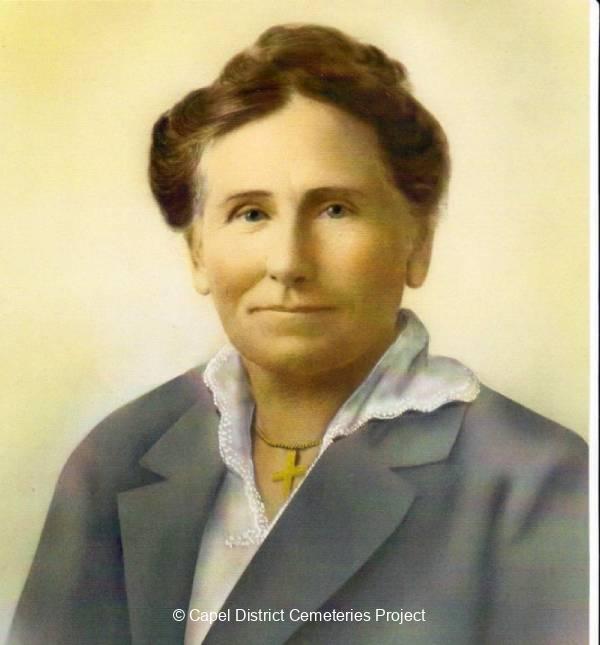 Sacred To The Memory Of

Also his beloved wife and our mother

The following is a summary of Catherine Wittfoht’s life taken from the book by John K. Scott 2020. “The fruitful life of William John Wittfoht. Biography of a Capel River pioneer farmer.” 143 pp.

Catherine Gaffney was born at Cross Keys, County Cavan, Ireland in 1870, the youngest child of James and Mary Gaffney and sibling to Susan, Margaret, Bernard, and James. The family migrated from Ireland to South Australia in two groups: Bernard first on the ship Hesperides, arriving 27 July 1875. Parents James and Mary with children James (Jas), Margaret and Catherine, who was then about five years old, came on the Hydapes arriving in Port Adelaide on Friday 1 September 1876. Susan was probably on the same ship but not listed. They then moved to Yongala to start farming. Yongala was founded in 1876 and grew rapidly, but within five years the railway bypassed the town – it was built further north at the town of Peterborough – and Yongala’s growth stalled. Today Yongala is a small village. The next time there is any mention of Catherine is when she married William John Wittfoht in 1892 and then moved to Broken Hill.

Catherine was working in a Port Pirie shop according to her daughter Catie when she met William John who was working in Port Pirie as a labourer. Their marriage was celebrated in the Roman Catholic Church, Port Pirie, with Andrew Ryan as clergyman. Catherine was 22 and thus some nine months older than William John at 21. They were well matched as they appear to have had a loving relationship for the rest of their lives.

They moved to Broken Hill where William had a job as spelter. After five years and with savings to buy farmland, they moved to Western Australia to take up a property on the Capel River. Catherine eventually owned an adjoining property plus land in the townsite of Capel.

They stayed on the farm for the rest of their lives. Initially the land had to be cleared and crops and orchard established. Fruit growing was particularly successful and profitable. In 1922 a substantial house was built called Ardenvale. In later years Catherine had help with domestic duties including from Ida, the eldest daughter. Depending on the season there were up to five workers on the farm and with five daughters (four trained to be school teachers) there was a full day of activities, feeding and cleaning.

Catherine lived her life very much in the shadow of William John, although the formal photos show them as both proud and successful people. There are no documents relating to her amongst the various papers and photos held by their descendants. Her daughter Tessie, in her life story, is the only source of information about Catherine’s life and she indicates that Catherine had strength in the partnership, making certain difficult decisions, especially after William died. In her own way she participated in the wider community, for example by being a member of the Country Women’s Association in Capel which was founded in 1924. She was listed by the CWA as a country woman pioneer as part of the Pioneer Women’s Memorial Fund and the memorial in Kings Park, Perth. She also took on civic duties such as being the Patron of the Capel Golf club (after William died).

If you are visiting this page and have further information that pertains to Catherin Wittfoht that you would like to add, can you please contact the Capel District Cemeteries Project via the CONTACT US section at the bottom of the main page. 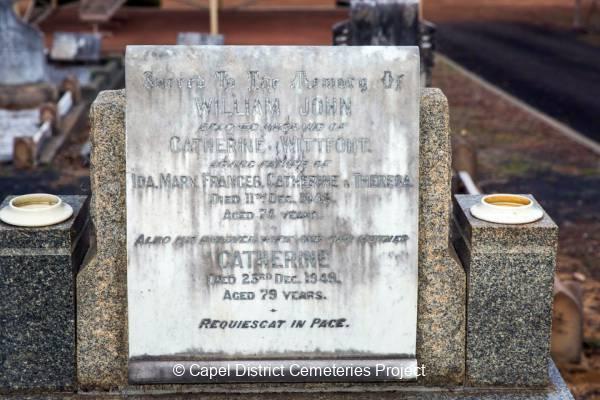