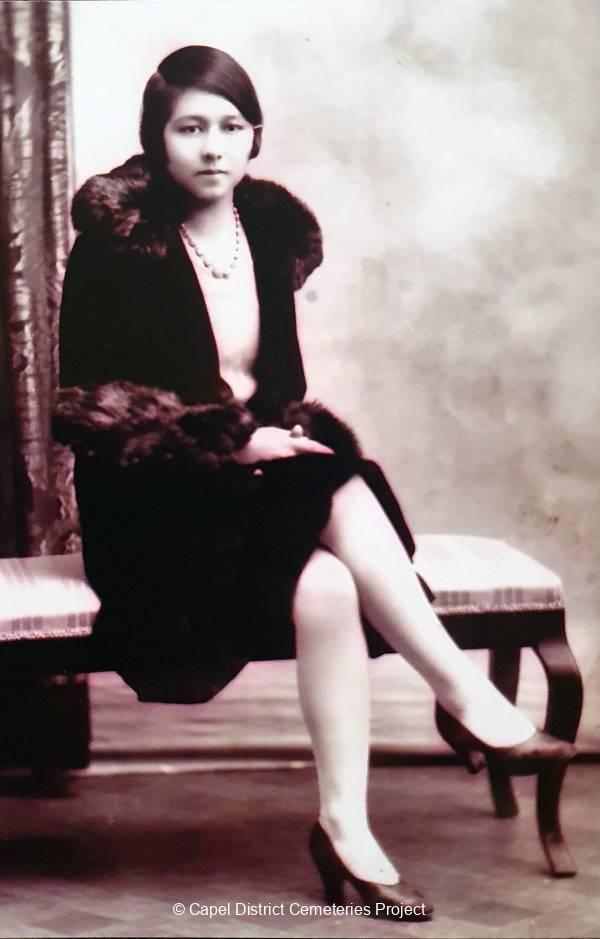 In 1895 Thomas and Bertha’s first child, Daisy Ilma Roberts was born in Bunbury. The family appear to be living on Bellevue Farm at Capel with Thomas’s parents, Frederick and Johanna Roberts.

Bertha and presumably, Daisy, is living in Constitution Street, Bunbury with Bertha’s parents, James Frederick and Ellen Wenn, as per the electoral rolls for 1903 and 1906. Thomas, in 1906 is living at Capel with his parents.

Olga Doreen Roberts was born October 10, 1909, at Beach Road, Bunbury, Bertha was 36 and living with her sister in law, Ellen Wenn. Thomas had not lived with Bertha for some time. Olga’s sister Daisy was 14. On the 1910 electoral roll Olga’s mother, Bertha was still living in Beach Road, Bunbury with her sister in law Ellen Wenn (nee Hannaby). Ellen was married to Bertha’s eldest brother John Charles Wenn, they did not seem to be living in the same house. He died in 1913.

By 1912, Bertha, Olga and Ellen or “Nell”, as she was known, had moved to Capel. Nell’s parents, Robert and Ellen Hannaby, lived in Capel. There did not seem to be any contact with Thomas Roberts who was living and farming at North Greenbushes.  In 1914 Daisy, Olga’s big sister, was living with their Grandfather James Frederick Wenn in Constitution Street, Bunbury. Their Grandmother, Ellen had died the previous year.

Olga was just 6 when her sister, Daisy Ilma married in 1915 to Richard Ernest Potter, in Bunbury. The following year on November 12, Olga became an Aunty when Daisy and Richard had a daughter, Annie Matilda Potter. Daisy, Richard and baby Annie moved to Victoria. Their next daughter, Eva Margaret Potter was born in Rushworth, Victoria in 1918. Sadly, she died the following year. Tragedy struck again, when in 1921, in Victoria, Olga’s sister, Daisy died.

We assume Olga went to Capel Primary School. Bertha was working as a cook, in 1922, to help support the family. Olga and Bertha are still living with Nell and Nell’s mother, Ellen Hannaby, on the Hannaby property, West Street, Capel. Olga’s grandfather, James Frederick Wenn died in May 1925, in Bunbury. Sometimes Nell’s nephew, Donald Hannaby lived with them too.

Olga, Bertha and Nell were part of a large turnout of people at the Roman Catholic Ball in March 1928 and then Olga was again out and about at the Capel Golf Club Ball in May.

Trove Article – Off to the Ball

Olga was 20 in 1929. On the 1931 Electoral Roll for Capel, she is listed as working as a waitress. Her mother Bertha is still working as a cook and they are both still living with Nell Wenn. Nell’s mother Mrs Hannaby died in August, 1934 and is buried in Capel. Life seemed to continue in much the same way, Olga waitressing at the Capel Hotel, Bertha a cook, also at the Hotel and Nell keeping the home.

William Lax Roebuck “Bill” came to board at Nell’s house, he was working at the Capel Dairy Company. In the early 40’s Olga and Bill Roebuck became friends. This friendship blossomed and they were married April 19, 1942, in the Registry Office in Bunbury. Olga was 32 and Bill 34. Sadly, Olga’s mother Bertha died on July 6, 1942. She must have taken comfort knowing Olga was happily married.

Bill was very involved in football and cricket. He was a very good sportsman. He enlisted in World War 2 in the Army Citizens Military Forces in Capel, his Service No was W70554A. The Unit held training days for the men of Capel.

In 1943, on the electoral roll, Olga had given up work and was listed as married, doing home duties. They were apparently living on the East side of the Capel River at Summer’s property. There was great excitement in October 1946 when Olga, 37, gave birth to William “Gordon” Roebuck in Bunbury. Nell was there to help Olga and be a grandmother to Gordon. They were once again living with Nell. Bill was still working at the Capel Dairy Company. On May 6, 1948, another son arrived but sadly he was stillborn. He is buried in Bunbury Cemetery.

Olga helped with Bill’s sporting clubs and was thanked by the clubs at their presentation nights. She took care of the football property. She must have washed the jumpers!

Olga was a great cook, she made a birthday cake for Maureen Griffiths 10th birthday, that was held in the Capel Hall. The cake took pride of place! Olga had always been good friends with Linda Griffiths (nee Williams). The Williams family lived down the road from Olga.

Olga and Bill built a house on part of the old Hannaby property, West Street, Capel. This was finished in 1953 and their friends organised a housewarming.

Olga was often helping with the organising of various fundraising events. She helped with the Christmas Party for the Capel Children and a benefit for the Blind School in 1953 and then in 1954 she was collecting funds for the Queen Elizabeth Gift Fund.

Gordon, 7, competed in the interschool sports day and was 1st in the running race for boys under 8. There were schools from Capel, Boyanup, Capel River and Vasse.

Life went on as usual for the Roebuck family. Bill kept working at the Capel Dairy Company and continued his sporting pursuits and Gordon went to school, Olga was involved in the community and Nell lived next door. In 1958, at the age of 48, Olga was diagnosed with Cancer. She battled on with help from the Hannaby family. Ivy (nee Hannaby), now Mrs Parke from Donnybrook, sometimes came and stayed and of course Nell was there too. As Olga became more unwell she took to knitting socks to help relieve the boredom. Sadly, just after her 52nd birthday, on October 25, 1961, Olga passed away. Gordon was just 14. Olga was buried in the Capel Cemetery 2 days later on October 27.

Compiled by DC (volunteer with CDCP) helped by WGR (son).

If you are visiting this page and have further information that pertains to Olga Doreen Roebuck that you would like to add, can you please contact the Capel District Cemeteries Project via the CONTACT US section at the bottom of the main page. 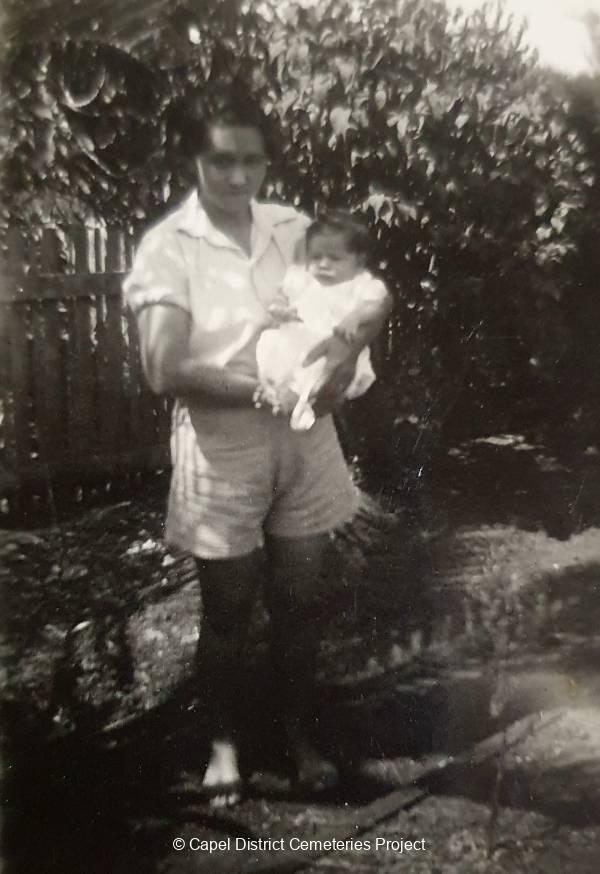 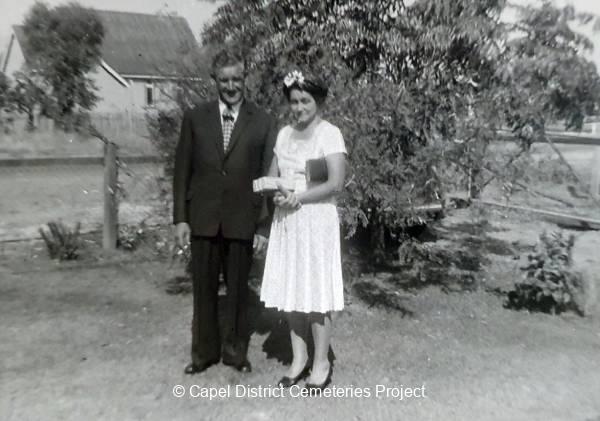 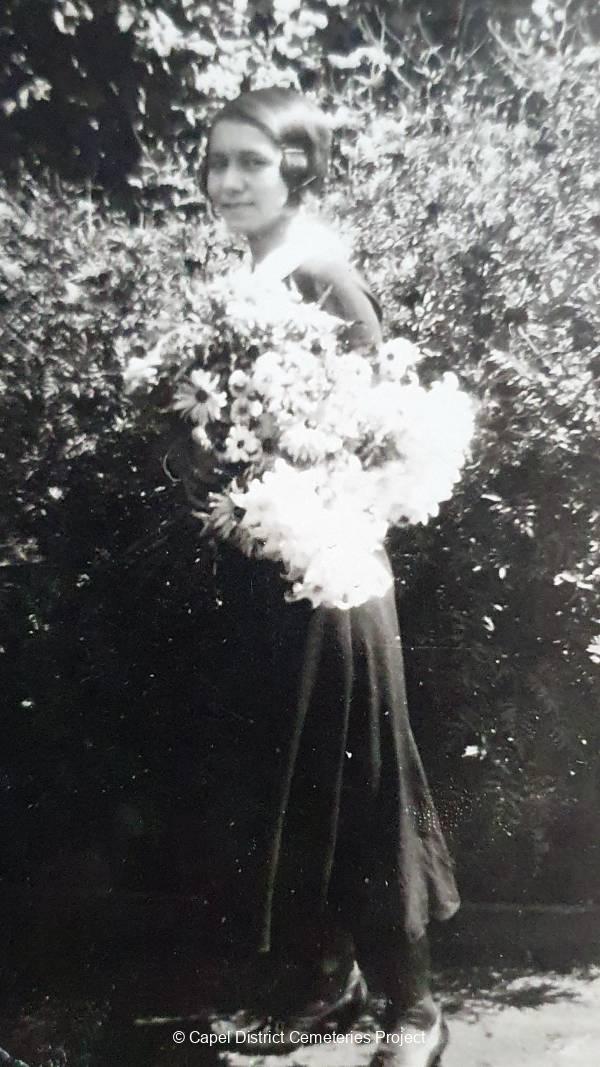 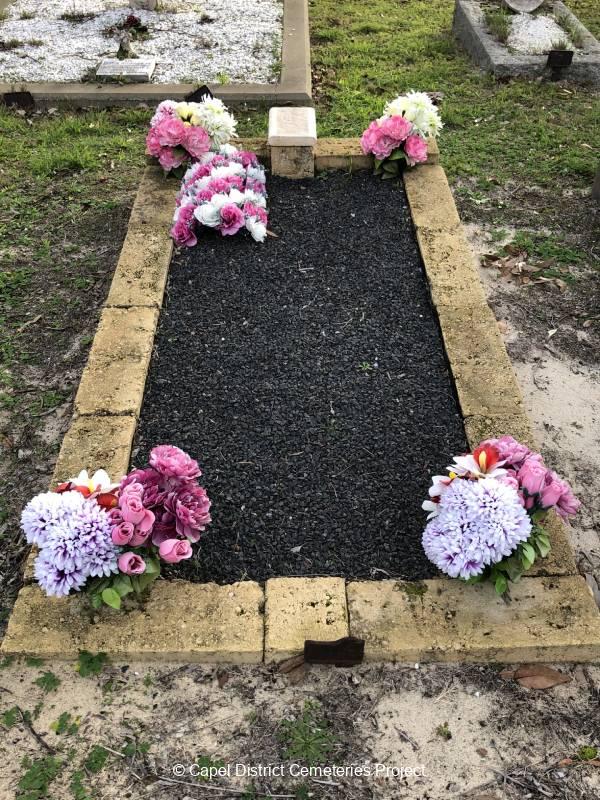 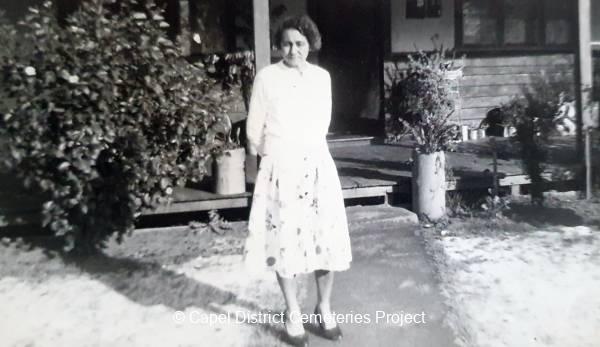