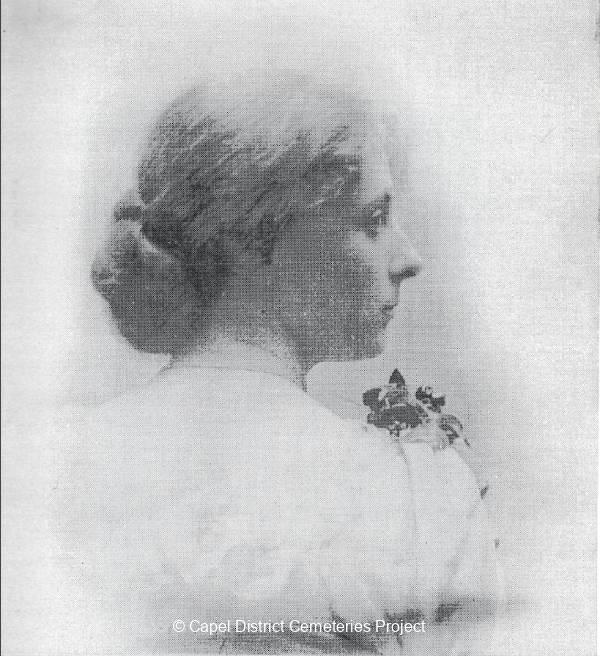 In loving memory of

Lucie (Lucy) Mary Hatchell was one of ten children, born to Frederick Hore Hatchell and Clara Ellen Hatchell. Her father was a General Medical Practitioner. She lived in the family home until her marriage to Sydney Montague Haig on 15 June 1901. A Haig of the Scottish whiskey fame. They had one daughter together, Sheila Muriel Haig who was born in 1902 in Wolstanton, Staffordshire, England.

Lucie was widowed on 14 May 1920. She was 45 years old. Her daughter Sheila died 1 December 1921 while Lucie was still living in Saskatoon, Saskatchewan, Canada.

Lucie was 54 years old when she immigrated to Western Australia and arrived in Fremantle on the ‘Hobsons Bay’ on 8 August 1929 with her sisters Editha Nicholls and Dorothy Nicholls. The Nicholls brothers had previously immigrated to Western Australia and had settled in Dardanup where they dairy farmed.  Editha and Dorothy came to Dardanup sometime later.

Lucie’s sister Dorothy Nicholls known as Dolly was married to Claude Nicholls and they later took up land at ‘Elgin Park’, Elgin. Lucie came to be with her sister to assist with home duties and to help Dorothy because of her hearing difficulties. Dolly was the youngest of Lucie’s family.

Lucie was a big supporter of the Elgin Hall and an enthusiastic helper at functions there during the 1930’s and early 1940’s. She was never far from her sister Dolly to help out with her hearing difficulties. She was a kind, thoughtful and respected lady of the Elgin district.

Lucie died aged 75 years and is buried in the Capel Cemetery. She pre-deceased her sister Dorothy by 21 years.

Dennis Nicholls nephew of Lucie. This story is a verbal account of his memories spoken to Jennifer Scott.

If you are visiting this page and have further information that pertains to Lucie Mary Haig that you would like to add, can you please contact the Capel District Cemeteries Project via the CONTACT US section at the bottom of the main page. 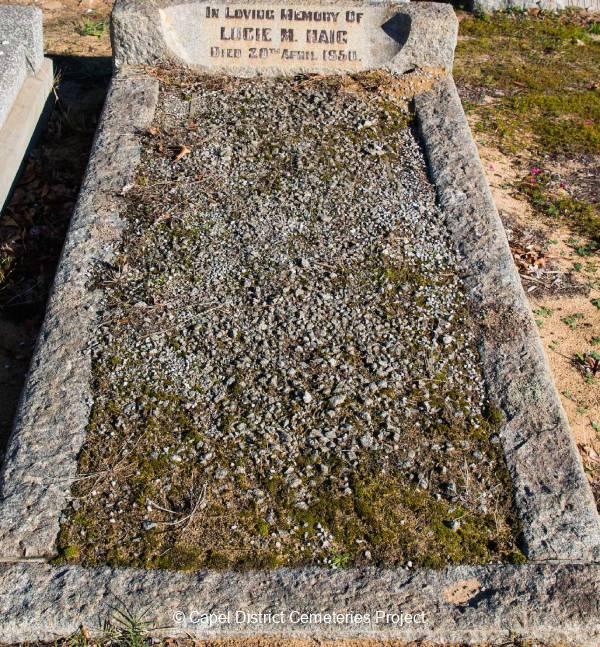 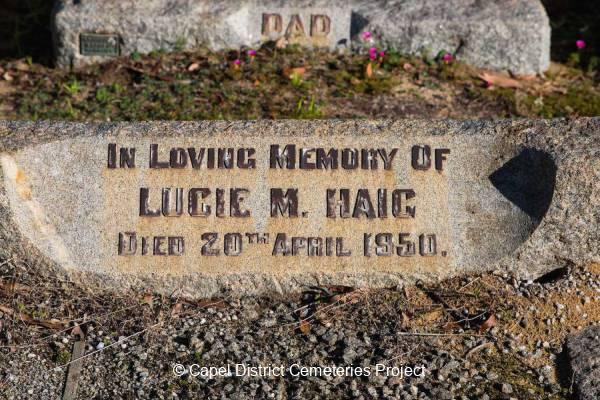