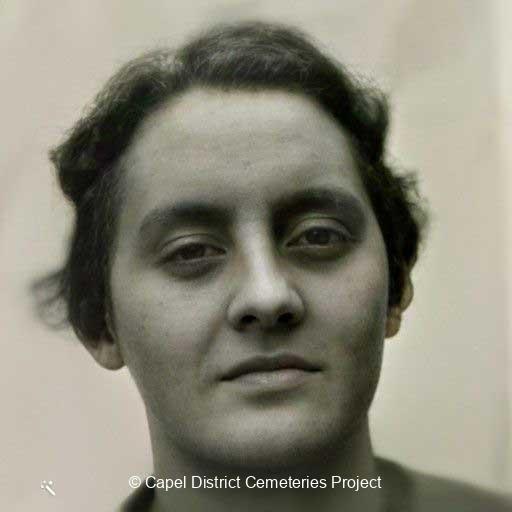 To perpetuate the memory of

Agnes was born in the year 1921 to parents Guy Loftus Maslin and Agnes Stella Bunt in the small town of Balingup in the South West of Western Australia.  Her father Guy purchased the family farm at Mullalyup in approximatley 1920 which is between Kirup and Balingup after returning from WWI in 1919. He married Agnes Bunt who was a local school teacher in November 1920.

Agnes grew up on the farm and attended the local school with her younger brother Guy.  In a letter written to the newspaper In March 1935 she talks about how the farm has had no rain and the 11 cows they are milking are almost dry and will need to be soon turned out into the bush paddocks.  She mentions that she is enjoying year seven at school much more than year six and about finding a strange insect something resembling a grasshopper. She signs the letter Agnes Maslin, Cundinup via Kirup.

Sometime during years of 1936-7 the family appears to have moved to Capel.  This may have been due to her father’s ill health as reported in the newspaper and a charity event held to raise funds by the local Capel RSL

Agnes’s father died in February 1942 in hospital in Perth and was buried at the Perth Karrakatta Cemetery.

Agnes married Ronald Ransom Alcock in 1943 in Geraldton. Ronald was born 18th December 1922 in Watervale, South Australia being one of five boys to  parents William Orange Alcock and Susan Mary Olive Davis. Ronald was also engaged in Military Service belonging to the RAAF Service Number 04422.  Agnes and Ronald welcomed a son Ian Ronald at the Busselton Hospital of 23rd February 1945.

At the early age of 24 years, Mrs. Agnes Jean Alcock, whose husband is on service in the Eastern States, passed away at the Busselton Hospital on January 14th.  Formerly a Miss Maslin of Capel, etc

It is believed that Agnes died during childbirth.

If you are visiting this page and have further information that pertains to Agnes Jean Alcock that you would like to add, can you please contact the Capel District Cemeteries Project via the CONTACT US section at the bottom of the main page. 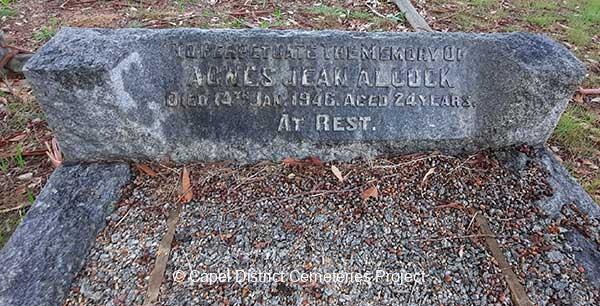